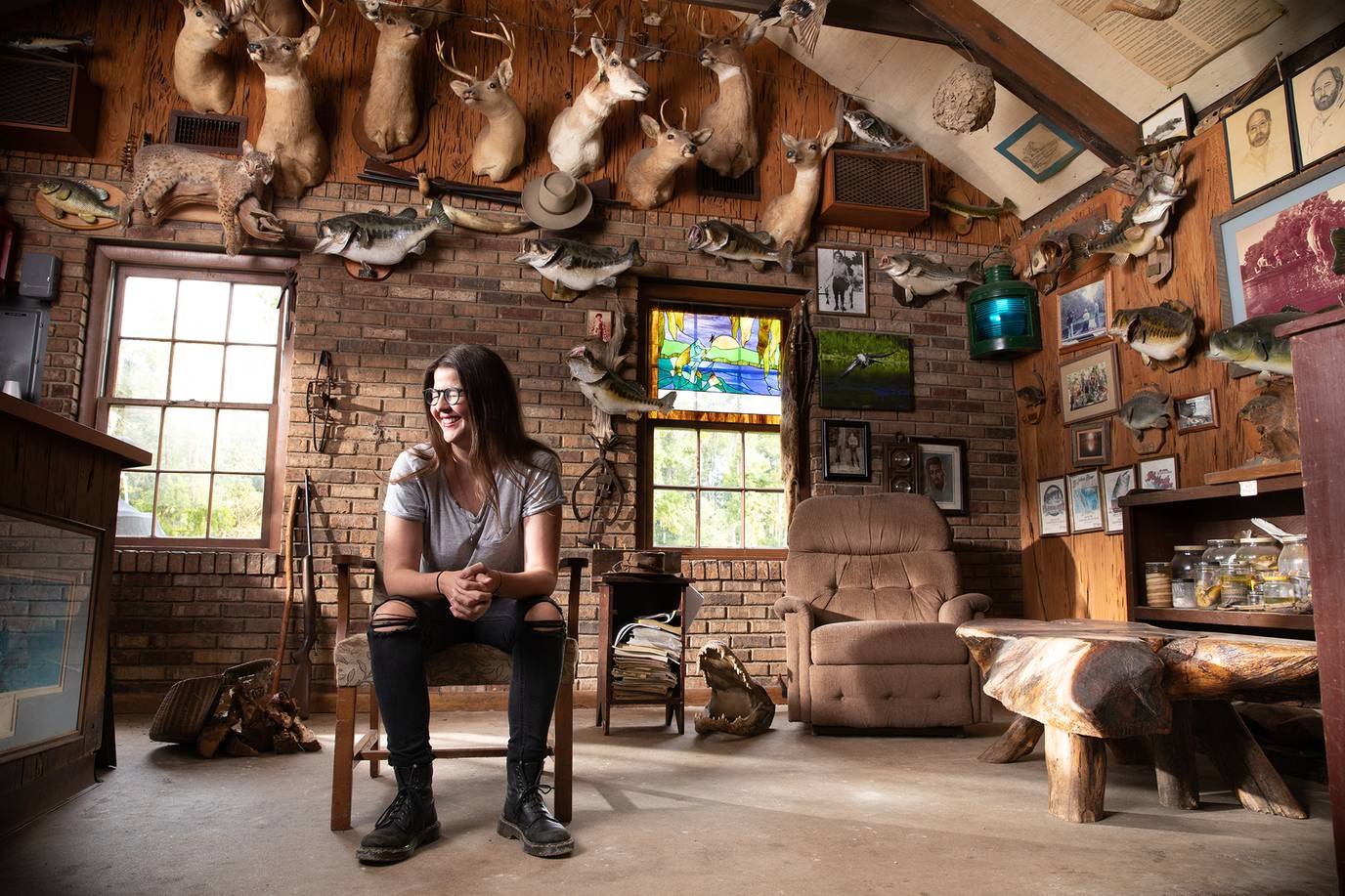 As a best-selling author and a full-time librarian, Kristen Arnett ’12 is used to digging into a subject and finding her way to something new.

Kristen Arnett ’12 is not a taxidermist. So, when she started to write her New York Times best-selling novel, Mostly Dead Things—a book steeped in rich details about, among other things, the world of taxidermy—Arnett knew she’d be doing some research. A lot of research, in fact. Fortunately, research is a task for which she’s well qualified.

This dig-in mentality comes naturally to Arnett, who has worked in libraries most of her life. As a nontraditional undergrad student in Rollins’ Hamilton Holt School, Arnett worked full-time at a public library while pursuing a bachelor’s degree in English en route to a master’s in library science. But at some point, immersed in the English department’s round-table discussions about the world’s great literature and robust studies on language as an art form, Arnett realized she’d developed another passion.

“I just really fell in love with writing,” she says. “I already wrote on my own—it was something I did for myself—but it wasn’t something I considered sharing with other people.”

At Rollins, Arnett began to develop the writerly identity that now distinguishes her: an author for whom place is as much a living, breathing character as it is a set piece. And on America’s most beautiful campus, her imagination thrived.

“Rollins is like this little jewel,” she says. “All the trees and the drippy Spanish moss and the lake. As a person who loves to write about place, being there was ideal. Just to look out at all the landscape and see how juicy and green and alive it is all the time. It very much influenced how I write about setting, for sure.”

In the last semester of her senior year, Arnett was selected as an intern for Rollins’ annual Winter with the Writers literary festival, an opportunity she now says changed her life. Working alongside the program’s director, Carol Frost, to produce the month-long literary festival was a turning point in the way she thought of writing as a career. She hung posters and planned social media advertising. She coordinated logistics for visiting writers and seated guests at readings. She had drinks and traded notes with her literary heroes, and now she’s set to kick off the 2020 season as one of the esteemed featured writers.

“I loved every part of it—everything I did,” she says. “Sitting in a group and workshopping and talking about writing in that kind of capacity—it really kind of fueled me,” she says.

After graduation, Arnett took a position as an interlibrary loan specialist at Rollins’ Olin Library. She began her master’s in library science as planned—but now she had a dual ambition that included working tirelessly to advance her writing career, submitting to journals, applying to fellowships, and even editing an issue of Specs Journal, Rollins’ literary magazine. Her strong connection to the College meant that she could continue turning to Rollins colleagues and mentors for advice about her writing career.

“I definitely got a lot of answers from English department professors like Carol Frost and Vidhu Aggarwal, whom I’m still very close with,” she says. “They just gave a lot of positive reinforcement about what it looks like to be a young writer in the writing world—the shape of it and how to approach it.”

Soon, the hustle paid off. A fellowship with the Lambda Literary Society led to a high-profile publication. A nod from a well-known writer, Roxane Gay, earned her attention from other higher-profile journals. A summer workshop at Tin House put her on the map with a publisher that would eventually release her short-story collection and novel.

Along the way, Arnett has never lost her fondness for librarianship. Today she’s the access services librarian at Barry Law School, a job she says continues to serve her as a lifelong lover of research and the written word. As for the success she’s found as a writer, she still seems a bit surprised that the passion she stumbled upon as a student at Rollins has become such a force in her life.

“When I’m writing,” she says, “I’m writing for me and am just kind of … hopeful. I hope somebody can connect with it. I don’t know who. So to have so many people connect has felt so special and really good. It’s this nice kind of thing that bridges gaps between people and communities­—it’s really lovely.”